The ERA states simply that “Equality of rights under the law shall not be denied or abridged by the United States or by any state on account of sex.” Aiding in the passage of the ERA directly serves NAWL’s mission of providing leadership, a collective voice, and essential resources to advance women in the legal profession and advocating for the equality of women under the law.

This resolution is not the first time that NAWL has identified the ERA as an advocacy priority. NAWL was one of the first national organizations to endorse the ERA and was present for its first reading and presentation at the National Women’s Conference in 1923. When Congress finally passed the amendment in 1972, NAWL adopted the full ratification of the ERA as a major project for the following decade. At that time Marguerite Rawalt, who spearheaded NAWL’s advocacy efforts, wrote in the Women Lawyers Journal that, “Equal justice does not exist for women under the Constitution as interpreted to date. They are the one remaining ‘class’ and category not yet adjudged to come under the legal umbrella of the Constitution.”

Congress set an initial deadline for the ERA’s ratification as 1982; this deadline passed with only 35 states having voted to ratify. In recent years, ratification has gained new momentum, and the 38-state threshold was met with approvals from Nevada (2017), Illinois (2018), and Virginia (2020).

NAWL’s new resolution solidifies the Association’s commitment to advocate for the equality of women under the law. Through a partnership with the ERA Coalition, NAWL is actively advocating for the Archivist of the United States to publish the ERA, and for Congress to remove the deadline, so that the ERA officially becomes the 28th amendment to the United States Constitution, finally guaranteeing women equal rights and equal protection after nearly a century of activism. 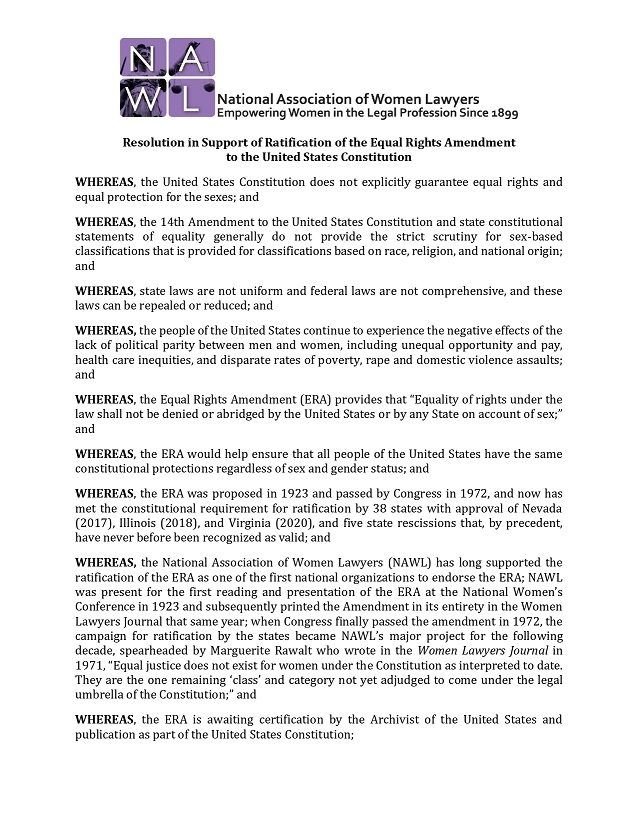