Justice Ruth Bader Ginsburg lived the mission of the National Association of Women Lawyers: the advancement of women in the legal profession and advocacy for the equality of women under the law.  She was one of us, and she was an inspiration to us.  In that spirit, in 2002, we honored Justice Ginsburg with NAWL’s highest honor, the Arabella Babb Mansfield award.  In 2019, NAWL celebrated the work of the ACLU Women’s Rights Project, which Justice Ginsburg co-founded in 1972, granting the Mansfield award to an organization for the first time. 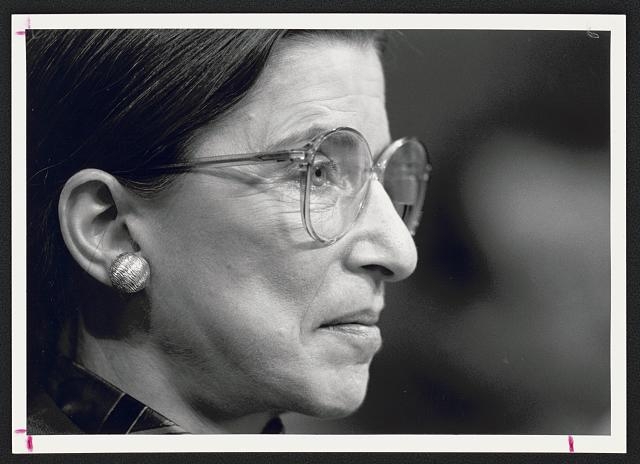 Ginsburg became a lawyer at a time when the legal profession was not welcoming to women.  She began her legal education at Harvard Law School in 1956, where she learned to navigate life as one of only nine women students in a class of more than 500, the only mother in the group.  She and her women counterparts were famously asked by Dean Griswold to explain why each had enrolled at the law school, taking the place of a man.  Undeterred by the male-dominated, hostile environment, she excelled academically and became the first woman member of the Harvard Law Review.

Ginsburg’s husband of 56 years and partner in life, Martin Ginsburg, supported her as an equal in intellect, and ambition.  He was an ally, long before we had a term for it, who led by example.  After Marty was treated for testicular cancer during his third year at Harvard Law School, Justice Ginsburg requested to spend her third year of law school in New York, in order to relocate with her family.  When Harvard denied her request, she transferred to Columbia Law School, and graduated first in her class in 1959 as a member of the Columbia Law Review.

After struggling to secure legal employment as a woman, a Jew, and a mother, Justice Ginsburg clerked for U.S. District Judge Edmund L. Palmieri.  She went on to teach at Rutgers University Law School and Columbia Law School, at the latter becoming the school's first woman tenured professor.  In 1972, she co-founded the American Civil Liberties Union Women's Rights Project (“WRP”).  During the 1970s, as the WRP’s first Director, she argued six landmark cases on gender equality before the U.S. Supreme Court, helping establish the legal groundwork for prohibitions against sex discrimination.

Notably, in Reed v. Reed, 404 U.S. 71 (1971), the Supreme Court extended the protections of the Equal Protection Clause of the Fourteenth Amendment to women.  Ginsburg also supported the challenge to an Oklahoma statute that set different minimum drinking ages for men and women in Craig v. Boren, 429 U.S. 190 (1976), filing an amicus brief and sitting at counsel table in this landmark litigation that established an “intermediate scrutiny” standard for gender discrimination.  Recognizing that gender equality is in all of our interests, in Weinberger v. Wiesenfeld, 420 U.S. 636 (1975), she represented a widower denied survivor benefits under Social Security, which permitted widows but not widowers to collect special benefits while caring for minor children - and won.

In 1978, her last case as an attorney before the Supreme Court was Duren v. Missouri, 439 U.S. 357 (1979), which challenged the validity of voluntary jury duty for women, on the ground that participation in jury duty was a citizen's vital governmental service and therefore should not be optional for women. At the end of Ginsburg's oral argument, then-Associate Justice William Rehnquist asked Ginsburg, "You won't settle for putting Susan B. Anthony on the new dollar, then?"

Justice Ginsburg was appointed by President Jimmy Carter to the U.S. Court of Appeals for the DC Circuit in 1980.  In 1993, she was appointed to the Supreme Court by President Bill Clinton.  Confirmed by the Senate in a 96-3 vote, she became the second woman to serve on the nation’s highest court.  In 1996, writing for a 7-1 court, Justice Ginsburg wrote the majority opinion in United States v. Virginia, 518 U.S. 515 (1996), which struck down the Virginia Military Institute’s all-male admissions policy and opened the institution to women.  Holding that Virginia violated the Fourteenth Amendment's equal protection clause because it failed to show "exceedingly persuasive justification" for VMI's gender-biased admissions policy, Ginsburg wrote "generalizations about 'the way women are,' estimates of what is appropriate for most women, no longer justify denying opportunity to women whose talent and capacity place them outside the average description."

Her colleague and friend, conservative Justice Antonin Scalia, praised Ginsburg's skills as an advocate: "she became the leading (and very successful) litigator on behalf of women's rights—the Thurgood Marshall of that cause, so to speak." An advocate for gender equality in practice, she was a consensus builder on the Court.  Legal scholar Cass Sunstein characterized her as a “rational minimalist,” who sought to build on precedent rather than pushing the Constitution towards her own vision.

After Justice Sandra Day O’Connor retired in 2006, Justice Ginsburg remained as the only woman on the Supreme Court.  For the first time in her history on the Court, that year, she read multiple dissents from the bench – to demonstrate a more intense disagreement with the majority.  On the bench, Justice Ginsburg remained a staunch advocate for reproductive freedom and gender equality.  As the Court became increasingly hostile to women, and political machinations of anti-equality members of Congress more blatant, Justice Ginsburg resolved to remain on the Court as long as she was able.  News reports confirm that in her final days, Justice Ginsburg dictated this statement to her granddaughter (and an attorney), Clara Spera: "My most fervent wish is that I will not be replaced until a new president is installed."

Indeed, NAWL will not settle.  Political opportunists have wasted no time attempting to justify a swift nomination and floor vote on a replacement for Justice Ginsburg before the end of 2020, an act directly contrary to their own behavior and public statements in 2016, when Justice Scalia died more than 8 months before an election.  We will not countenance a different result, especially with early voting having commenced in a number of states and less than 50 days to go before an election that will be a referendum on justice, the rule of law, and the future of our democracy. This nomination shall wait until 2021, after the people have spoken.  Let the people vote, and the people shall decide.

We grieve the loss of Justice Ginsburg, to the profession, to women, and to this country.  According to Jewish tradition, a person who dies on Rosh Hashanah, which began last night, is a tzaddik - a person of great righteousness. The Hebrew root of tzaddik is "tzedek (צדק)" which means - "justice."  May her memory be a blessing, to us all.